Gurdwara Manikaran Sahib is a famous Gurdwara. It is located in Kullu district, Himachal Pradesh. Gurdwara Shri Guru Nanak Dev (Manikaran Sahib) was discovered by Baba Narayan Hari, the history of the Gurdwara was mentioned in Bhai Bala Janamsakhi.

Guru Nanak than lifted a rock and a hot spring appeared from that place. The disciples were able to make food.

When Bhai Mardana was having trouble making Prasad (chapatis) because they kept sinking in the hot spring, he asked Shri Guru Nanak to help him. Shri Guru Nanak told him to ask God for the same. Bhai Mardana said, “I am going to donate my life in the name of God”. The prasad amazingly floated from the spring.

Guru Nanak Dev said that anyone who donates his life in the name of God, All his (or her) drowned items will float. This was a miracle.

A number of Sikh and Hindu pilgrims visit the Gurdwara every year.

The Ram Temple, built in the 16th century, is situated near the Gurdwara. 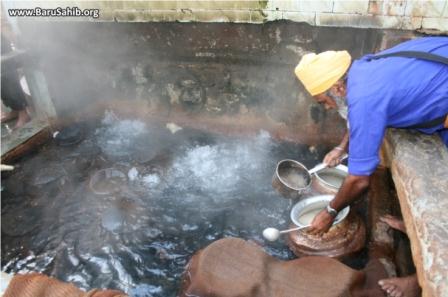